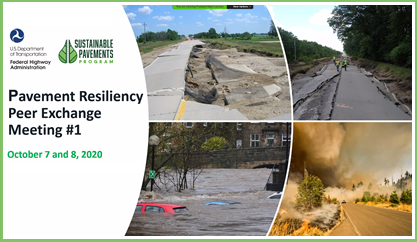 The first of two FHWA-led peer exchanges on resilience was held earlier this month.

The goal of both sessions, according to the FHWA, is to increase the body of knowledge and practice of designing, constructing, and maintaining more sustainable pavements through stakeholder engagement, education, and tool development.

Technical presentations covered the extreme weather and other events and their effects on pavements, as well as transportation impacts of high-tide coastal flooding. Two other presentations covered how to introduce climate resilience into pavement management and methods for developing an extreme weather risk framework using flooding events in Houston as a case study. Presentations showed dramatic effects of flooding, including cases where infrastructure has been altered by extreme events.

Breakout sessions led by Steve Muench of the University of Washington and Tom Van Dam of NCE helped identify and prioritize resilience related issues and the role of pavements in resilience planning strategies. A third breakout group discussion toward the end of the second day focused on information gaps, as well as research and other needs. Organizers centered the discussions on pavements, but also encouraged participants to express other transportation-related topics where they had resilience concerns.

Much of the discussion focused on the impacts on pavements of inundation from rising water levels (sea or river flooding), the impact of greater temperature extremes,  and the need for resilience factors to be included in pavement design methodologies including Pavement M-E.

There seems to be growing recognition within the groups represented in the peer exchange that rigid and stiffer pavement structures are more resilient to base, subbase and subgrade weakening (softening) associated with saturation due to inundation.

“This is important from both a pavement design and pavement rehabilitation perspective,” Leif says. “If we adjust our pavement design approach for new pavements to account for the likely saturation of the underlying layers in flood prone areas, we can reduce the potential loss of fatigue life and make the pavements more resilient. Use of stabilized bases, thicker and/or stiffer pavement sections can be part of the solution. For existing pavement sections that are flood prone and represent critical traffic routes (evacuation, freight, etc.), the pavement structure can be stiffened and made inundation resilient via concrete overlays.”

Some of the major gaps in the pavement resilience space include better tools to quantify loss of structure and fatigue life due to subgrade and base saturation, and better ways to define areas with roadways that are likely to experience flooding and inundation.

The second FHWA-led peer exchange is set for early December.