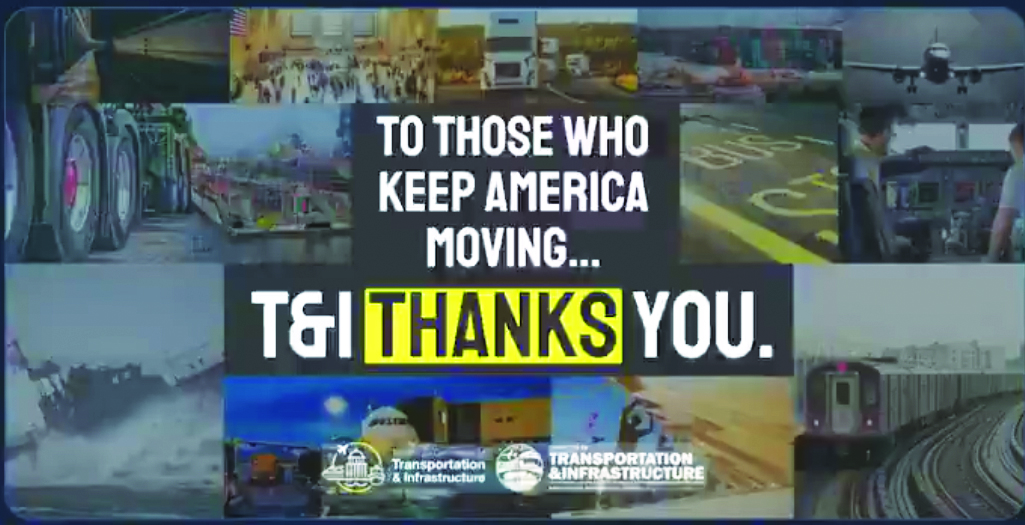 Capping off the House T&I Committee’s “tweetstorm” last week, officials released a post-event video recognizing the effort and thanking essential workers in every field, including those in our industry. Click here to see the tribute video.

We also participated in a fourth campaign that celebrated Earth Day. It was a perfect opportunity to present facts and photos highlighting concrete pavements and materials. Our contributions centered on pavement longevity, sustainability, resilience and other environmental features and benefits.

ACPA members, chapters and industry allies also supported our efforts and posted some inspiring messages and images, creating a very strong and compelling set of facts and images that give the cement and concrete industry a commanding presence. We thank all the members, chapters, and allies who supported these important and timely communications campaigns 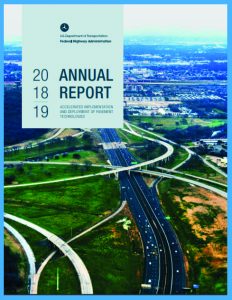 Jerry Voigt provided some comments on behalf of the concrete pavement industry.  ““Profound changes are happening all around us and at an ever-increasing pace! Driving these changes are population increases and shifts, consumer trends, and the increased use of technology in almost every facet of life. These and other factors are transforming the roles of highways and the people responsible for their design, construction, and rehabilitation.”

The AID-PT* program was the result of a legislative provision that was championed by ACPA and first included in the Moving Ahead for Progress in the 21st Century Act (MAP 21).  This ACPA-led initiative created both a mechanism and funding for the delivery of pavement technology for both the concrete- and asphalt-pavement industries.

The International Symposium on Pavement, Roadway, and Bridge Life Cycle Assessment 2021 (formerly LCA 2020), has been rescheduled for January 13-15, 2021 in Davis, CA.

In related news, the FHWA’s Sustainable Pavements Technical Working Group has been scheduled for January 21 at the same location. Both events were originally scheduled for June 2020. Click here to see the registration information. 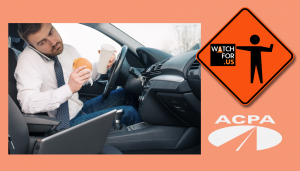 ACPA is participating in a series of social media campaigns this week on the always important topic of work zone safety. Special social media images and messages have been created to encourage social media followers to urge motorists to pay attention, be careful, slow down and avoid distracted driving in and near construction work zones.

The National Work Zone Awareness Week is led by the FHWA and supported by transportation agencies,  groups and companies comprised of transportation-construction interests, highway users, labor unions, and others who share both the care and concern for workers.

ACPA supported this by using materials from the FHWA, as well as images and messages related to our pavement industry and the companies that support highway and roadway construction. A number of related campaigns are also organized and implemented this week.  Some of the most common of the various social media tags are: #NWZAW, #Our Roads, #OrangeforSafety, etc.

ACPA also joined forces with NAPA and 18 other trade associations to rally around the cause of informing the social media audience of both the statistics related to work zone accidents and incidents, as well as dangerous behaviors to avoid while driving through or near construction work zones. The campaign and its social media tag are called #WatchForUs.

ACPA also supported Earth Day this week, posting messages that remind people of the unparalleled sustainability benefits of concrete pavements. The campaign gave us the opportunity to reflect upon and recognizes a few of the many long-life pavements across the United States. Earth Day postings on a wide range of topics appear with the social media tag, #EarthDay2020.

ACPA extends its thanks to all the members, chapter personnel and others who are actively engaging in these campaigns, and of course, for those who supported the T&I Committee’s #ToThoseWhoKeepUsMoving campaign on Tuesday.

There’s still time to participate in the work zone safety campaign, so ACPA encourages members to post messages about this important cause as often as you can this week, using the tag #WatchForUs.

Thanking Those Who Keep Us Moving 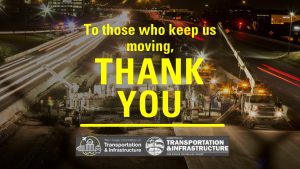 On Tuesday this week, ACPA national, Chapters, members and allied association partners joined the U.S. House of Representatives’ Transportation & Infrastructure (T&I) Committee in what was aptly called a “Twitterstorm.”

The massive social media effort on the Twitter social media site was intended to recognize and thank people who keep the nation moving, with special emphasis on people working in the fields of transportation and infrastructure.

For ACPA, it was an opportunity to recognize members and others who continue to work on the grade or other workplaces to help the nation manage through the COVID-19 pandemic.

The concrete pavement industry is, of course, essential to keeping the nation moving, so ACPA created a web page and sent emails to staff, members, Chapters and others to encourage participation.

T&I Committee staff launched the large-scale communications effort at 1 p.m. (EDT), and by the end of the day, hundreds of  messages were posted. The campaign used the tagged message #ToThoseWhoKeepUsMoving to rally participants around the important and timely message.