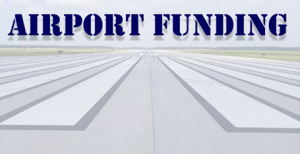 Transportation Secretary Elaine L. Chao announced today that the FAA will award $1.187 billion in airport safety and infrastructure grants, according to an FAA press release.

The money will be available for 100 percent of the eligible costs under the Coronavirus Aid, Relief, and Economic Security (CARES) Act, the FAA says

“This Federal investment of over $1 billion represents the Department’s continued commitment to the safety and efficiency of our nation’s airports for the traveling public,” Secretary Chao says.

A complete listing of grants and an interactive map of airports receiving funding are available on the FAA website.

The grants will fund a wide variety of projects, including repair and construction of runways and taxiways and installation of aircraft lighting and signage. Other possible uses include conducting airport master plan studies, installing airport perimeter fencing, and purchasing aircraft rescue and firefighting equipment.

Representatives of ACPA met with John Dermody, Director of the Office of Airport Safety and Standards; Khalil Kodsi, Airports Division Manager; and Doug Johnson, FAA Headquarters Paving Engineer. Gary Mitchell, ACPA’s Vice President of Airports, says they had a productive discussion about various research topics, as well as how to structure an applied research program that would facilitate agency and industry collaboration.

As ACPA has been reporting, Gary and others representing the concrete pavement industry have fostered an excellent relationship with the agency and have been working closely with officials from  FAA Headquarters and the William J. Hughes Technical Center to discuss both a viable collaboration and specific focal points for applied research that is focused on improving the quality of concrete pavements. As reported in ACPA  TODAY, the 2020 appropriations legislation, signed into law in December, provides funding for R&T similar to what ACPA developed and led to create the Accelerated Implementation and Deployment of Pavement Technologies (AID-PT) program with the FHWA. ACPA worked closely with PCA and NAPA on both programs, and it should be noted that the asphalt pavement industry is also engaged in similar discussions about R&T with FAA officials.

Also last week, there were two meetings with the US military Tri-Services, the first of which involved military officials, ACPA staff, Airfield task force Chairman Martin Holt (Interstate Highway Construction), other contractors, vendors and architectural and engineering (A/E) firms to discuss specifications. The group had a thorough and detailed discussion about the military’s Unified Facilities Guide Specifications, all with the aim of fine tuning and improving the concrete pavement spec.

Later in the week, Gary, Martin Holt and Jerry Voigt, met with the Tri-Services to discuss specifics ways to help improve concrete pavements and concrete pavement construction. “We agreed to enter into a close working relationship,” Gary says, adding that this relationship is focusing on a “better understanding of each other’s perspectives.”

He adds the military has some very exacting standards for quality, and those standards have everything to do with both the overall mission, as well as the type of aircraft taking off and landing on pavements, often in less than ideal conditions. “We understand and appreciate the Department of Defense requirements and why they are so exacting.”

The working relationship is very important and underscores the important point that our goals are the same: to increase the quality of airfield concrete pavements, he says.

The Hon. Stephen M. Dickson was sworn in Monday by U.S. Transportation Secretary Elaine L. Chao as the 18th Administrator of the Federal Aviation Administration (FAA).

With almost 40 years of aviation industry experience, Dickson is widely respected and takes on the role of FAA Administrator during a critical moment for aviation safety, according to an FAA press release.

As Administrator, Dickson will lead an agency responsible for the safety and efficiency of the largest aerospace system in the world — a system that operates more than 50,000 flights per day. He will oversee a $16.4 billion-dollar budget, more than 47,000 employees, and focus on ensuring the agency and its employees are the best prepared and trained professionals to meet the growing demands and requirements of the industry, the press release continues.

“I am honored to join the outstanding team at the Federal Aviation Administration and look forward to ensuring our aviation system maintains its proper place, leading the world in both safety and operational performance,” said Captain Dickson, a retired Delta Air Lines official and former U.S. Air Force officer and F-15 pilot.

Gary Mitchell, ACPA Vice President of Airports and Pavement Technology, says the document mostly corrects typos and clarifies language. He adds one notable revision is language that allows an additional option for collecting straightedge data using a rolling inclinometer.  Click here to see a “landing” page that includes a link to the complete list of errata, as well as the revised AC in both Word and PDF formats.

Related articles may be found by clicking on the links below:

A joint effort led to the inclusion of full-depth reclamation (FDR)* in the FAA’s Standard Specifications for Construction of Airports, also referred to as FAA Advisory Circular 150/5370-10H.

It started from the FDR being promoted to airport owners, most notably by the Southeast Chapter, says Gary Mitchell, ACPA’s VP of Airports and Technology. He says the Chapter and other ACPA promoters have done an outstanding job promoting FAA projects, adding, “they’ve completed several where they’ve rehabilitated pavements with in-place cement-treated base material, but those projects often had to be completed through a modification of existing airport pavement construction standards.”

“A lot of times, promoters would discuss projects with engineers, who expressed interest, but explained they would have to do a modification of standards and often would hear there wasn’t enough time to do so,” Gary says. It’s often difficult to get engineers to push a modification of standards through the FAA because it takes a long time for them to go through the process, he adds.

“In all, the process could take anywhere between a few weeks to as much as three months,” Mitchell says, adding, “It was really a burdensome process and it wasn’t done as often as we would have liked, so the FDR strategy wasn’t considered an alternate on a lot of projects because it was too difficult to get the modification quickly.”

All of this changed during the process when Gary, with support from contractors and other members of ACPA’s Airport Task Force were working together with the FAA on a revision of the FAA’s 150/5370-10 standard.  The  entire construction guide specifications were revised during the review and revision process, including specifications for concrete pavement construction (P-501), aggregate base course (P- 209), cement-treated base course (P-304), and other specifications.

“We discussed with the FAA the development of the FDR spec so we could avoid going through modifications,” he says. “They were receptive to the idea, which we advocated because it would give engineers the option using a specification instead of the cumbersome modification of standards.”

On a parallel path, Gary said he was also having discussions with key personnel at PCA, including Wayne Adaska, Director of Pavements & Geotechnical Markets, Dr. Paul Tennis, Director, Product Standards & Technology, and others at PCA who recommended specification language, provided technical guidance, and joined in the discussion. He also credits long-time PCA member Al Innes, who remains active with LafargeHolcim and the MIT Sustainability Hub. Together, this group provided sound engineering judgment and technical information, which led to the FDR specification.

During the months-long process of marking up the FAA’s 5370-10 standard, now known as FAA Advisory Circular 150/5370-10H, Gary says the PCA representatives, Al Innis, and ACPA Airport Task Force provided excellent support and expertise. He adds that  members of the ACPA Airport Task Force also participated in the reviews of the specs related to concrete pavement construction. He adds that Martin Holt of Interstate Highway Construction, Angela Folkestad of the Colorado-Wyoming Chapter-ACPA, and Harold Honey of Michael Baker International participated in a comprehensive review and mark-up of the standard.

Gary emphasizes that long-term relationships and open and forthright discussions with Doug Johnson and Greg Cline also helped the revision process go smoothly. Gary is also quick to credit other organizations** that provided input on the standard.

The net result of this team effort is a standard that now includes FDR specification language, which allows engineers to easily and quickly incorporate the FDR strategy into airport rehabilitation plans, while at the same time, streamlining the overall pavement rehabilitation process. The ultimate beneficiaries are the airports, airport owners’ representatives, and of course, the taxpaying public.

_______________
* Full-depth reclamation (FDR) is one of several cement-based rehabilitation strategies, which involves recycling an existing asphalt pavement and its underlying layer(s) into a new base layer, according to the National Concrete Pavement Technology Center (CP Tech Center).  FDR with cement increase the structural capacity of the new roadway by providing a stronger, more consistent base, the CP Tech Center says.