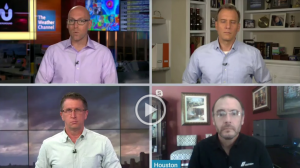 In an interview on the Weather Channel last Friday, Jim Mack presented some balanced perspectives on pavement resilience. Jim is Director of Market Development at CEMEX* and past Chairman of the ACPA Board.

“For the most part, both asphalt and concrete roadways can be made more resilient and flood resistant,” he tells host Weather Underground Mark Elliott and other staff meteorologists.

“But concrete, just by its very nature, is a little bit more naturally flood resistant just by the stiffness of the system,” he continues.

Jim describes two types of flooding damage. “Washout is where running water comes along and washes out the ground,” he says, adding that both rigid and flexible pavements are both susceptible to this damage.

He also describes inundation as “the silent killer,” adding that this is where rising waters, as are often seen in aerial views, soak the base and the ground under the pavement.

“This can lead to the long-term deterioration of a pavement that’s not as stiff as other pavements, such as concrete,” he says.

The almost 3-1/2 minute interview included other facts and examples, as well as video footage of flooded pavements. Click here to see the complete interview.