Responding to an invitation to present a guest lecture at the University of Alabama. Eric was asked to go over PavementDesigner and its origins, but he broadened the discussion. First, he traced the evolution of PavementDesigner to the PCA method. He presented a brief history of concrete pavement design going all the way back to the first pavement placed in Bellefontaine, Ohio, when designing pavements was little more than just creating concrete slabs with as much concrete as could be produced.

He covered the evolution of jointing, the first major road tests (Bates and Pittsburg), and covered Westergaard’s stress equations. “These set the foundation for the design and construction of modern highway concrete pavements,” he said.

Eric then covered the history of the AASHO Road Test and the subsequent AASHTO Design Guides that were based on it (including AASHTO 72, 86, and 93, etc.), which he said inherently have limitations because of the limited inference space of the road test.

Covering the PCA method, which started shortly after the early AASHO road test, he said pavement design took a mechanistic approach (vs. the empirical approach used by the AASHO road test). Eric covered later developments and updates of the PCA method, ACPA’s purchase of the design methodology in 2005, the introduction of ACPA’s StreetPave, and ultimately, the incorporation into PavementDesigner.

Eric also covered the history of Pavement ME, drawing attention to its applicability to Interstate and State highways. He also led the students through real-world demonstration runs with PavementDesigner, including an exercise that compared the compared PavementDesigner runs with those of AASHTO 93 and Pavement ME. Throughout his presentation, Eric also mentioned career opportunities in the concrete pavement community. 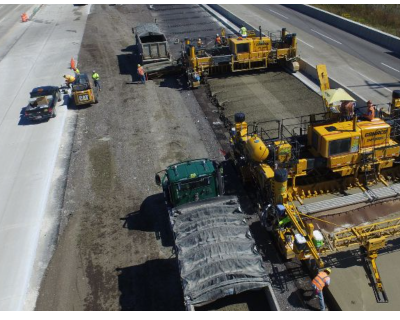