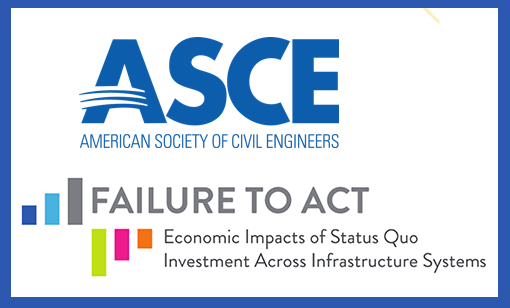 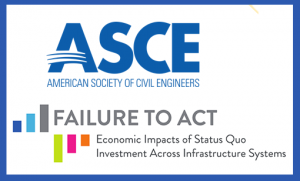 An ASCE web conference provided a high level overview of recent research that projects the toll of inaction if infrastructure investment levels remain status quo over the next 20 years.

The research informs the association’s “Failure to Act” public affairs report series, while also setting the stage for the latest “Report Card for America’s Infrastructure” which will be released next week.

Emily Feenstra, ASCE’s Managing Director of Government Relations and Infrastructure Initiatives moderated the web conference and presented details about the upcoming release of the report card.

Steven Landau, Executive Vice President of EBP US, presented research methodology, describing the three pillars of the research that are used in the five Failure to Act Reports, whose release began last year and continues this year. The research is based on data gathering, economic research, and economic modeling, he said.

Greg DiLoreto, Committee on America’s Infrastructure (Chair Emeritus) presented the key points of the research report. He described how economic factors and other dynamics have changed and will continue to change if investment levels remain the same.

“For the next 20 years, the average American household will spend $3,300 per year due to infrastructure deficiencies,” he said, citing examples such as sitting in traffic, hitting a pothole, power outages, and water main breaks.” The average American household currently loses $63 per week because of chronic underinvestment, roughly the equivalent of a takeout dinner for four every week for a year.

Losses will continue on a larger scale, too, he warned. About 47 of the projected jobs lost in 2039 will be in high wage, high production jobs such as manufacturing and healthcare, DiLoreto said, adding, “Of the total economic impacts projected in the 20-year study, more than three quarters will occur between 2030 and 2039.”

He said people in the US are already paying the price for underinvestment in infrastructure, “but if we fail to act, our costs will mount.” For the period of 2030 through 2039, about 80% of gross output losses, 79% of GDP declines, and 78% of disposable income losses are expected to occur between 2030 and 2039 if we maintain the status quo. This amounts to a loss of $10.3 trillion in GDP, including $2.4 trillion in exports, he said, adding that without adequate infrastructure investment, US trade deficit will grow by $626 billion. “We’ll lose 3 million jobs by 2039, roughly two times the number of Walmart employees in the US,” he said.

This report is particularly timely given the ongoing discussion in Congress and in the administration about robust and sustained investment in our nation’s infrastructure.