A series of events focusing on SPS Pavements are planned for the year, according to Larry Scofield of the IGGA/ACPA Concrete Pavement Preservation Partnerhip.

SPS pavements are the focal point of the Long Term Pavement Performance (LTPP) SPS-2 study, or Strategic Study of Structural Factors for Rigid Pavements, which represents the most comprehensive set of concrete pavement performance data in the United States.   Scofield has been studying and evaluating SPS-2 pavements and organizing events that discuss concrete pavement preservation treatments, their service lives, and the overall SPS-2 program.

The first such event will be held in Phoenix on February 21.   The registration period has closed, Scofield explained, but additional events are planned. Dates or time frames, as well as states where other events will be held include:

Additional details are being developed and will be provided as they become available.  For additional information, please contact Scofield at lscofield@acpa.org or at 480.775.0908. 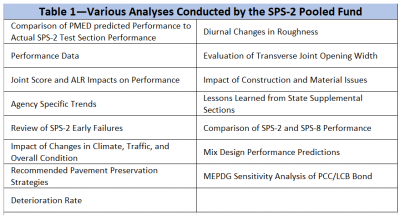 Looking Back at the SPS-2 Pooled Fund Study Results

There is still time to participate in the next SPS-2 Tech Day.  The event will be held on Thursday, May 22, in Delaware, OH.  There is no charge [...]
Read more