The goal is to determine the best times to open projects to traffic.  The team of researchers is led by Dr. Na (Luna) Lu, an associate professor at Purdue’s Lyles School of Civil Engineering and an Indiana Chapter-ACPA Scholar in Concrete Pavement and Materials Science.

The team is collecting data through sensors the group designed to track concrete strength development in real time through measurements of hydration, stiffness, compressive strength and other concrete properties. The work is being done on projects being constructed by two ACPA members, E&B Paving and Milestone Contractors, L.P.

After testing, INDOT plans to adopt the sensors, allowing them to remain permanently in highway pavements with the aim of keeping contractors informed of concrete distresses.

The test method involves embedding a sensor patch to the concrete surface and connecting it with wires to a measurement system. Using piezoelectric effect, electric polarization resulting from mechanical stress, the sensors provides accurate measurements of many concrete properties at once.  Dr.  Lu and her team will be presenting a detailed report on the testing during NC2 next week.  (See the related story, “ACPA Previews NC2.”)

_____________________
Photo:  Sensors developed by Purdue engineers are being embedded into Indiana highways to determine when concrete is mature enough to open to traffic. (Credit: Purdue University photo/Erin Easterling.) 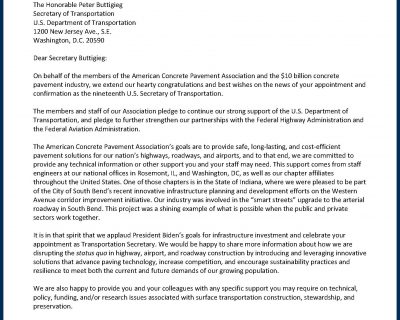 ACPA sent a letter to Pete Buttigieg, the recently confirmed 19th Secretary of the US Department of Transportation. Leif Wathne and Pat Long [...]
Read more
All News, Association News

John Leckie, P.E., has joined the the Indiana Chapter as the associaton’s Director of Pavements & Materials. His primary focus is to [...]
Read more